Unblock your team by capturing collective knowledge that anyone can find.

“If there is one thing developers like less than writing documentation, it’s responding to unnecessary escalations […] and too many escalations wear down the developers.”

“We needed a better place to store all the questions and answers that people were repeatedly asking, and we discovered Stack Overflow for Teams.”

“We use Stack Overflow for Teams internally when onboarding new developers, and when new developers ask questions, everyone can benefit from the shared knowledge.”

How can I cancel an ongoing OTA update download?

Edit: Apparently this question was marked 'popular', so I thought I would mention that I found my solution, which has worked without issue: An app called DisableService which let me disable the Motorola OTA Update service. Root is required.

I've been trying to avoid my phone updating for about a week now. Every few minutes I'm switched away from whatever app I'm using to an update screen. Originally there was an option to update later, but now it's gone and I simply switch back to the app I was using. Obviously, this is quite disruptive. Unfortunately, I tapped the 'Okay' (something to that effect) button and now it's attempting to download the update in the background. I've been able to mitigate this by stopping the MotorolaOTA app, and disabling Wi-Fi.

I'll be clearing out all my Wi-Fi connections in case my phone connects to one and continues the update. I'll also see if I can introduce something which blocks the update servers.

How can I cancel this so I don't have to worry about the update completing? I have compatibility concerns.

How else can I battle this OTA terror? Please, you're my only hope!

Edit: I have multiple ideas. One is to, and I don't yet have extensive knowledge of how SSL certificate authorities work, but to introduce a custom root CA, with a CRL including the update server.

Cruder methods include: running a nameserver to use when on Wi-Fi, which blocks the update server, or a proxy/VPN which could filter requests. Maybe I could create a fake update server which says, "all good, no updates" and make my phone talk to it with a custom root CA certificate.

Disabling Motorola OTA should do the job. Just go to the Apps section in your Android preferences and find the Motorola OTA entry under the 'All' tab. Disable it from there and you shouldn't get any more update prompts. 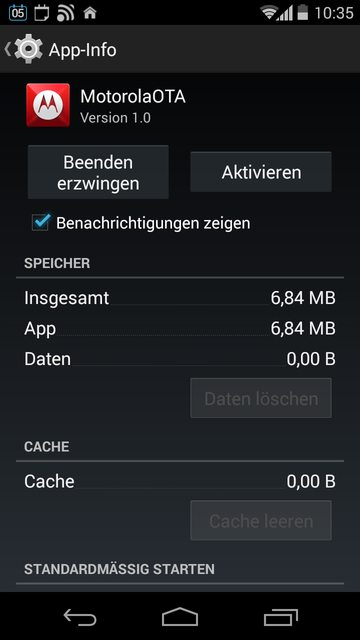 Not the answer you're looking for? Browse other questions tagged ota-update 3g motorola-moto-g or ask your own question.

2
OTA update failing after rooting phone
1
How do I upgrade my rooted Nexus One using OTA updates?
1
OTA update to Jelly Bean 4.3 fails (Nexus 4)
6
OTA Update on a rooted Nexus5 with Custom Recovery and Kernel
2
OTA Update Query
3
How can I disable automatic OTA updates on a Nexus device on Marshmallow?
0
Unable to enter recovery mode for Marshmallow manual OTA update on Nexus 6
3
How do I update an OTA while retaining TWRP and Magisk, only with my phone?