I recently updated my Moto G2 to Android Lollipop via OTA update. I've successfully installed the update(around 500mb i guess). I saw the new feature of adding new Guest and New user acccounts just like the one in PC's so that one user doesn't get access to other user apps or data.

Will those 10 apps that are opened and still running in the background in my owner account drain my battery while the phone is in Guest mode?

or only the app that runs under my guest account will have an effect on my phone's battery usage.

From what I can tell, the multiuser feature DOES drain quite a lot of battery. Here is a screenshot of my battery stats - I have not logged in as the other user since my last full charge. 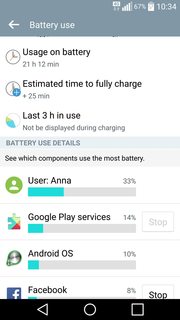 First of all you must understand that the smartphone actively manages all the apps and accounts without interruption. That means if you are creating multiple accounts then your smartphone will have to manage all accounts actively. That is the reason why your smartphone is draining more battery.

These are the few things to remember for long life of battery.

Not the answer you're looking for? Browse other questions tagged 5.0-lollipop battery-life stock-android motorola-moto-g multi-user or ask your own question.

6
How notifications work with multiple users?
2
Do applications run in user profiles that are not active / run in background profiles?

1
I have three batteries used in succession and all new. The problem is the same. I supect apps are in use when not needed
11
Add apps to default Guest account on Lollipop
0
Unable to add restricted profile on Xperia Z2 tablet
10
Session logout on device with multiple users?
2
Battery Issue with Android 6.0
0
Does You Android drains battery after system update?
0
Unidentified app using excessive battery
2
Reboot to secondary user
0
Create an unprivilleged user in android