Hebrew is a language spoken in Israel, but also used in Jewish liturgy. and is written with letters from right to left (RTL).

Hebrew is the official language in Israel (this modern Hebrew is also called Ivrit), and also used in Jewish liturgy. It is the language the TaNaKh (Christians call it the "Old Testament") is written in. It belongs to the family of semitic languages, and is written with letters from right to left (RTL). The Hebrew alphabet consists of 22 letters, all consonants. Vowels (Nikudim) are usually not spelled; if needed, they are attached to the consonants (usually below the one they follow). 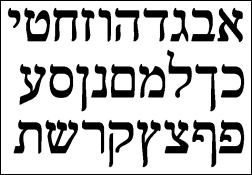 Nexus 5 with an English interface and a Hebrew keyboard

Hebrew language to a physical keyboard