The Samsung Galaxy Note is an Android smartphone/tablet computer hybrid ("phablet"), introduced in October 2011 and noted for its screen size, between that of conventional smartphones and larger tablets, and its included stylus.

The Galaxy Note, with a 135 mm (5.3 in) screen, is sized between smartphones such as the Galaxy S II and the Galaxy Tab tablet. 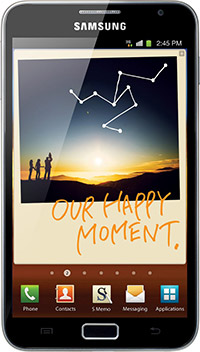 Can preloaded apps be restored when Factory reset-ed

Alarm silent, even when not in silent mode