Can't pin Last Added auto-playlist: "This music is only stored on this device"

Update: Recent versions of Play Music seem to have this issue fixed.

Recently installed a new ROM on my Galaxy Nexus and am trying to redownload all my music from Play Music (I do have All Access, so I can't just transfer files). I need to keep them offline because I have no mobile data connection, only wifi.

When I try pressing Keep on Device in the options menu of the playlist, it gives me a toast saying "This music is only stored on this device". Also strange, where there should be an image of the pin, it is just blank. You can still press the area and it'll give you the same message. The Last Added playlist is the only thing I can't keep offline for whatever reason. I tried installing older versions of the app, but no dice (up to v5.0, since that's when all the All Access stuff was added, i think). What can I do to fix this?

When trying to keep on device: 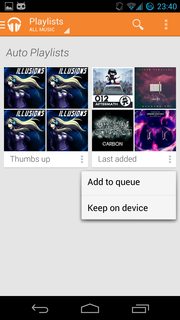 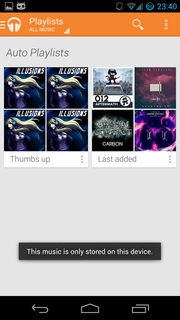 Invisible button where pin should be: 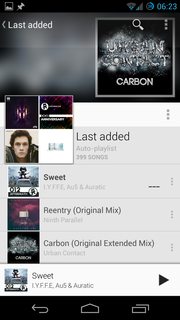 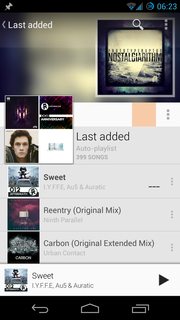 EDIT: I tried decompiling the apk and that toast string named "toast_cant_pin_side_loaded". And the function in which it is called seems to imply that the playlist is either unpinnable or had some problem while pinning.

EDIT 2: Just noticed that in the playlist, the latest song added was some song that wasn't part of my library (The Phantom pt. 2 by Justice). I pressed add to library, but that didn't fix the problem. I pressed remove from library and it didn't fix anything, but it's no longer in the playlist. It doesn't seem to be on my device and there should be no reason why it would be on my device. Also, I tried manually creating a playlist with all my music and that pins just fine. That is not a solution, as I want to have Play Music automatically download new songs without me having to manually add them to the playlist.

EDIT 3: Flashed the new stock 4.3 from Google (after wiping of course), and the same problem >:(. So it seems this is a problem with the app itself, and not my ROM.

EDIT 4: Same problem exists on another Galaxy Nexus and a Nexus 4 I tried.

Install the old version and pin the last added playlist, then use the play store to update to the latest version.

Your last added playlist will now be pinned, when you update there is no still no pin icon but it is pinned.

If I understand correctly, the message means that you can't set the tracks to be kept on the device, since they are currently on your device, not from Play Music. Even the toast string toast_cant_pin_side_loaded suggests this (see Sideloading). Unfortunately I can't confirm this since Play Music isn't yet available in my region.

I think you should try do a full wipe data/factory reset using your preferred custom recovery ..and then re-flash the ROM and tell us what happens.

I wrote to google about this issue and they advised to clear app data (Device Menu > Settings > Apps > All > Google Play Music > Clear Data). This worked! However, mind you - you will need to download all your music again if you keep it offline.

Not the answer you're looking for? Browse other questions tagged samsung-galaxy-nexus google-play-music offline .

2
How to avoid looping the album/playlist automatic?
5
Songs from Google Play don't show up on phone
3
How to add/remove an individual song from device in May 2013 update Google Play Music app?
4
Wrong playlist order in Google Play Music app
7
Can other apps play music from my Google Music library?
1
Where are music files downloaded from the Google Play Store stored on an Android device?
0
Google Play Music Icon Is Incorrect
10
Does YouTube Music allow non-premium accounts to download their own uploaded music to their device for offline use?