I use ConnectBot sometimes to connect to my ubuntu machine, and that works fine, however it just comes up with a standard shell, not my byobu screens that I get when I connect to it using another machine running ssh, such as my windows machine running PuTTy.

This is what I see when I connect using ConnectBot (yes, I use the dvorak keyboard layout): 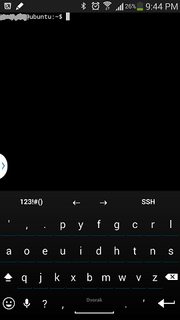 And this is what I see when I connect using PuTTy: 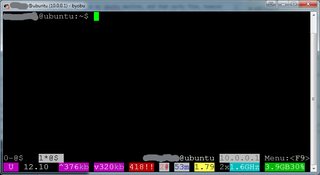 Is there any way that I can see my byobu screens from ConnectBot?

user2183694 suggested that I run byobu attach-session, but when I did that, the byobu screen would come up for a split-second then quickly pop-up at the bottom the message:

Then it would drop back to the normal terminal.

This at least gave me hope that it could work on the phone.

Then I tried just byobu, which gave me the error:

But even using TERM= byobu responds with:

So I tried screen -r, which gave me the self-contradictory message:

But I discovered that screen -r -d works! Unfortunately the -d detaches any other screen connections (eg from my other pc), but at least it works.

I don't know why I have to detach other sessions, I can actually reconnect them from another pc after connecting from the phone without problems though. If anyone knows how to do it without detaching existing sessions, that would be good.

Edit: I also asked this question on the AskUbuntu site, as the machine I'm connecting to is running Ubuntu, and this answer is relevant.

So, the best answer is: If you go into ConnectBot's "Emulation Mode" settings and change it to "xterm" or "xterm-256color", byobu will work properly from the phone.

You should be able to use the attach-session command to attach your existing byobu session.

Not the answer you're looking for? Browse other questions tagged ssh or ask your own question.

16
Is it possible to use an Android device as X11 server for a remote machine over SSH?
3
Connecting to X11 on linux
3
Connect from Android to SSH server without password
3
SSH to Mac using Android Phone
6
Android keyboard and remapping the CTRL key
3
SSH tunnel with two hops
0
How can I determine the hostname of another machine on the local network?
1
Android SSH with AWS and JuiceSSH