when I look at my Nexus 5 with android 5.1. battery screen, I can see something like this: 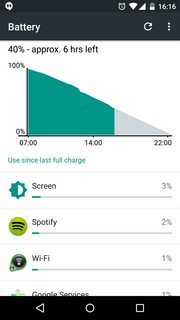 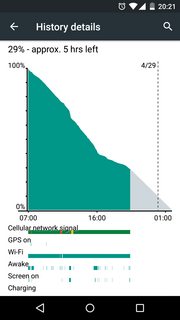 Sum of all per-app percentages in list is 10. However as you can see, there is 60% battery consumed (40% remaining). So, what is the deal here? Who consumed 50% battery? Or what do the percentages next to apps mean?

As you can see, screen was on just for few short times, the same for awake, and yet battery life about 18 hours? I dont get it.

Also, I found this issue reported on AOSP, but noone from google seems to care: https://code.google.com/p/android/issues/detail?id=80131

There's usually a wrong conception on how these "numbers" should be interpreted. For example, your screenshot shows "Screen: 3%". So what does that mean?

Second, not all participants of the party were named – there's a threshold. I'm not sure where exactly that threshold lies, but it's safe to assume that somewhere below 1% of participation, they simply get "uninteresting".

Which still leaves the question open: what was responsible for the remaining 90% of the 60% "battery loss"? To find out about that, you will need a helper to sum up everything. I recommend you taking a look at my list of apps to Identify Battery Consumers. Personally, I'm using BetterBatteryStats – which at least in the "tech scene" (especially on XDA) is "the reference product". Less technical oriented users often hold to GSam Battery Monitor.

Now lets go for your second screenshot. Focus on the bars below the graph:

Ah – you've noticed I've skipped two bars? Yes, and two important ones at that. These two must be seen together: Your device was "awake" more often than your screen was turned on – so some apps get active while you're not actively using your device. That might be OK (and doesn't really look excessive here) – think of background-syncs to check for new mail, updates for your wheather widgets, Spotify streaming music to your ears (no screen-on needed for that), and the like. Though, "big blocks" in the awake-bar with no corresponding part in the screen-on-bar should draw your attention. Using the Spotify-example, you might be able to easily account for them (did you stream music at the time? Oh, OK: then that's it, probably).

Again, you cannot always correlate those with the first screen. For a really thorough analysis, you would need a specific app. And the really good ones when you want to "dig deep" are not coming for free. My first look would go to the paid version of SystemPanel and comparable candidates, which can to good background monitoring (check out the screenshots; you will also notice this app doesn't forget about stuff having participated with 0.2% only). You can give the free version a look if you're curious, it can do most of the stuff as well.

Not the answer you're looking for? Browse other questions tagged battery-life nexus-5 5.1-lollipop or ask your own question.

3
Why don't the percentages on the battery chart add up to anywhere near 100%?
2
Why is the battery usage graph so useless?
0
Auto disconnect wifi when out of wifi zone?