Yesterday there a bunch of app updates, I didn't pay much attention to which ones, there were perhaps 8 or 10. Since then my phone has shutoff and/or rebooted unexpectedly at least 8 times. 4 times it's gone through a full "optimizing apps" cycle, which take 30+ minutes. Two of those optimizing apps cycles resulted in a premature shutdown.

Today there was an Android System Update, 16.1mb, which I applied. Thankfully it seems things are more stable now, with only two shutdowns, but that's not enough of course.

I decided this is enough of a kick for me to finally do a full reset and root the device. I'm trying to do a Full Backup of non-rooted devices but am stuck. The phone asks for "current backup password" but I don't know what that is. I don't remember setting one, but I may have. I did do an adb backup about a year ago. 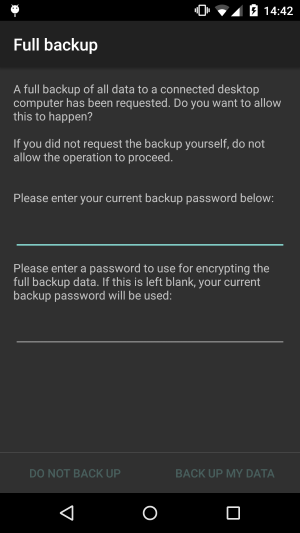 I tried the on-boot de-crypt password, but that's not it or at least nothing happens on the PC side after entering it and then tapping the "back up my data" button.

My little research here indicates that the current backup password is saved in the file /data/backup/pwhash (no plain-text). In some earlier Android versions removing that file followed by a reboot resulted in paving a way for setting up new password since current password would default to blank then. But in Lollipop, you've to remove the file pwversion (in the same directory) as well.

Because the location is under /data/ you'd get "permission denied" message if you attempt to browse into /data/backup, be it from a file manager or from command-line, unless root access is provided.

The only way (as it seems to me) to reset the password without root access is the factory reset.

Not the answer you're looking for? Browse other questions tagged backup or ask your own question.