On eBay I picked up one of those cheap Chinese 7" Quad-Core AllDayMall A88s tablets for $25, WiFi-only. 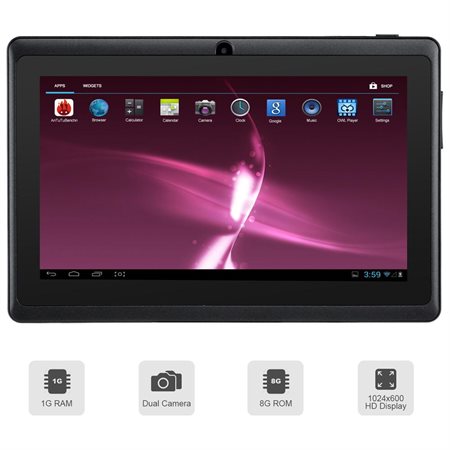 When it comes on all is fine unless you try to open the browser. Then things start popping up that are quite unsavory. So I did a factory reset but it seems all that junk is built in.

I sure hope the kid's version doesn't have this firmware. There are some things you simply cannot un-see. Perhaps the pink ones are different.

Going into settings, apps, I was able to identify and stop a lot of it. But as soon as I opened the browser it went nuts showing more.

I got the unit to tell me to sideload a file via the menu that comes up when you hold down-volume and power. Cool. Following somebody's advice I installed the Android SDK to do it. But then found out that all I needed was the ADB Platform Tools with adb.exe. (Don't need the SDK at all it turns out)

So I plugged it into my Win7 machine which installed an Alcatel driver for it. I could see it in device manager.

Pushing on, I found out for positive certain that it needs Alldaymall-A88X-android 4.4.2-bsf.rar and thought I was on a roll.
All I had to do was download the file, unRAR it to get the ROM image, then refresh the ROM with the command it was asking for:

Switching gears, I used the Windows version of one-click KingoRoot which said it succeeded. Went to the play store to get Kingo SuperUser and a good file explorer so I can seek and destroy.

During the process of setting up for Play Store it wants to log in, so I let it connect to WiFi. Big mistake. I never even got to the part of credentials with Google. Pop-ups on every screen and unresponsive touch panel. OK, reboot.

I installed a mouse via an adapter into the USB port but it worked the same as the screen. Just fine. Until it didn't.

I am not sure how to find the built-in junkware so I can remove it.

I made some headway but this has taken hours. So now I turn to Android Stack Exchange to get some expert opinions. You can see that I have done my homework before asking for help.

Last thing to do tonight is to uninstall the SDK.

The question is in the title: Now what?

After rooting it and getting most of the software stopped it settled down a lot.

Google browser came up without incident.

A couple of coupons came on screen which closed when I clicked on the little x in the corner.

But then, as soon as I tried to get logged into Play Store it froze up and put a white low-res band across the bottom that said EXIT on the left, with a large low-res X on the right. At first I just waited then tried again, but no mouse action would make it do anything.

When I hit the X on the bottom banner, it rebooted and restarted all the bloatware again...

After several rounds of this I tore it apart and removed the Lithium battery so I could just throw it in the trash.

Then, having learned about KingoRoot, I downloaded it into my good RCA Viking Pro, and rooted it successfully.

Downloaded the SuperUser browser which is nice, dual pane.

Then as I browsed around I wanted to see system text files so I downloaded QuickEdit for that. It works well.

Then I downloaded the Qute SU Console and it would handle simple commands like pwd and ls and such. It even included a bash editor which allowed simple scripts to work. There was no sudo command so I couldn't change most of the system from read-only to writeable. Maybe that is just the nature of ROM.

Manipulating things on the sd card is easy, of course.

Downloaded a VIM program which worked.

So this hasn't been a total waste. It was a learning experience.

Meanwhile, the answer to "what now?" has turned out to be to use Google and learn all I can - and throw the darn thing away. It is absolutely worthless. I suppose I got $25 worth of learning out of the experience so it isn't a total loss. Chin up and all that.

Now I need to figure out how to dispose of the 2200ma Lithium battery. I live out in the desert and am tempted to start a campfire and use it for fireworks, but perhaps the recycling center is better for the environment.

Thank you for the comments along the way.

Not the answer you're looking for? Browse other questions tagged rom malware or ask your own question.

14
How to find out which app is trying to open spam websites?
3
What does the command `adb sideload FILE` do?
1
Where is system update option located in Alldaymall A88S tablet?
1
Can/How to Update Alldaymall a88s Android 4.4 to 5.0?

0
Wipe tablet and install new ROM
2
Heyzap interstitial ads in every app
3
What does the command `adb sideload FILE` do?
1
Getting toast message with text sending
5
How do I fix malware installed automatically in the /system directory?
3
Is this "Boost" / File Manager app a true system app or malware?
2
Can my father's smartphone be compromised?
0
What is "GPUwatch Interceptor app"
9
Suspected malware on stock apps in a Mediatek mtk65* based phone