I have a DualBand WiFi router, and a DualBand WiFi repeater. Both use the same SSID, both have 2.4GHz and 5GHz bands enabled. But my Android devices mostly connect the 2.4GHz band – even if I stand next to the router or repeater, and thus the 5GHz signal is quite strong.

I want them to prefer the 5GHz band if available (and strong enough), but use the 2.4GHz otherwise.

Router as well as repeater have "band steering" enabled, so it doesn't look like there's something to force it from that end¹.

So is there anything that could be done on the Android devices? Most of them are rooted (and the one that's not is using 5GHz most of the time), Xposed is available as well if it helps. Modifying wpa_supplicant is acceptable though not the preferred way, as is using a 3rd party app².

¹ in case it's relevant: Fritz!Box 7390 and a Fritz repeater 1160
² which then preferably comes via F-Droid. Apps with Google dependencies (Firebase, Analytics, License check etc.) are not acceptable.

You can take advantage of the experimental "prefer 5 GHz" feature from WiFi band – or Smart WiFi Selector, which offers that as well: 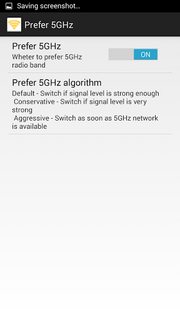 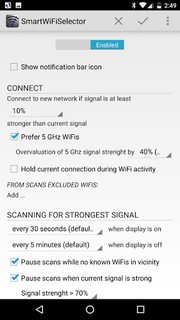 I haven't really tested all these applications, so I'm not sure if they fall into the acceptable criteria (firebase, google dependencies etc) besides my device comes with this feature already:

Acknowledgements: How to change from 5GHZ to 2.5GHZ frequency on Android N

In terms of potential 3rd party apps, the closest I have come across is WIFi 5, which is dated , but offers such functionality. It specifies the signal level to switch to a 5Ghz access point and displays a notification showing the available bands. 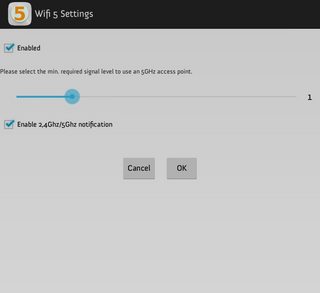 WiFi 5 was last update 2012, unlisted from Playstore in 12/2017, and thus is only available via ApkPure currently. Not sure whether to trust that site.

Increase beacon interval (at least double it) in your router settings for 2.4 GHz network and all your dual band devices will discover and, as a result, connect to 5 GHz network. 'Beacon interval' defines how often (in milliseconds) the beacon is broadcast by the router and used by clients to discover access points. It will have no negative impact on speed or stability, it only makes your 2.4 GHz access point discovered later than 5 GHz.

Not the answer you're looking for? Browse other questions tagged wi-fi settings .

3
Can 5GHz wi-fi be disabled in Nougat?