Where in HTC Sync is the option to disable synchronization upon connecting the phone to the computer?

There used to be plenty of options in the old versions of HTC Sync. By old versions I mean versions like 2.0 that came with my phone. This is the version I have been using for two years now. I just thought I would update to get all the latest bells and whistles. But little did I know that the newest HTC Sync version is just one big splash screen with a picture of my phone on it and one big SYNC button. And it is very resource hungry.

I am downloading the new HTC Sync Manager right now. But I don't think it's compatible with HTC Desire or other older HTC devices. I think it's mainly made for the HTC One series of phones. So I don't expect much from it, but I'll give it a try anyway. Are there more sync options in Sync Manager than in the regular Sync?

What's a good alternative to HTC Sync that I can use with HTC Desire? Which ones are popular? I don't want anything too fancy. I don't need anything that's too much resource hungry and media focused. Just plain sync tool (PIM).

The first time HTC Sync Manager started it was scanning my computer for media files. I aborted the operation and went to settings to change the language. It prompted me to restart the program so I clicked OK. It restarted and got stock at the splash screen. Now it does that every time and the only way to close it is to terminate the associated process.

Great software indeed... it should not stop working just because the user changes the language in the settings. Looks like I will have to install it all over again to erase any conflicting config files and such.

According to the download page of HTC Sync Manager, HTC Desire phones should be supported.

In my case when I first started the application it started loading all my media files from my pc (which took some time). After everything was loaded, the music etc was stored in my Media gallery of the HTC Sync Manager.

If you want to disable the synchronisation of your phone on connect, disable the option "Automatically start sync when device is connected" under the More tab. In my case that tab was only available when you connect your phone (probably to be able to use different settings for multiple phones).

So maybe you should just try to reinstall the latest HTC Sync Manager, because it should work for your phone too. Just be a little patient. 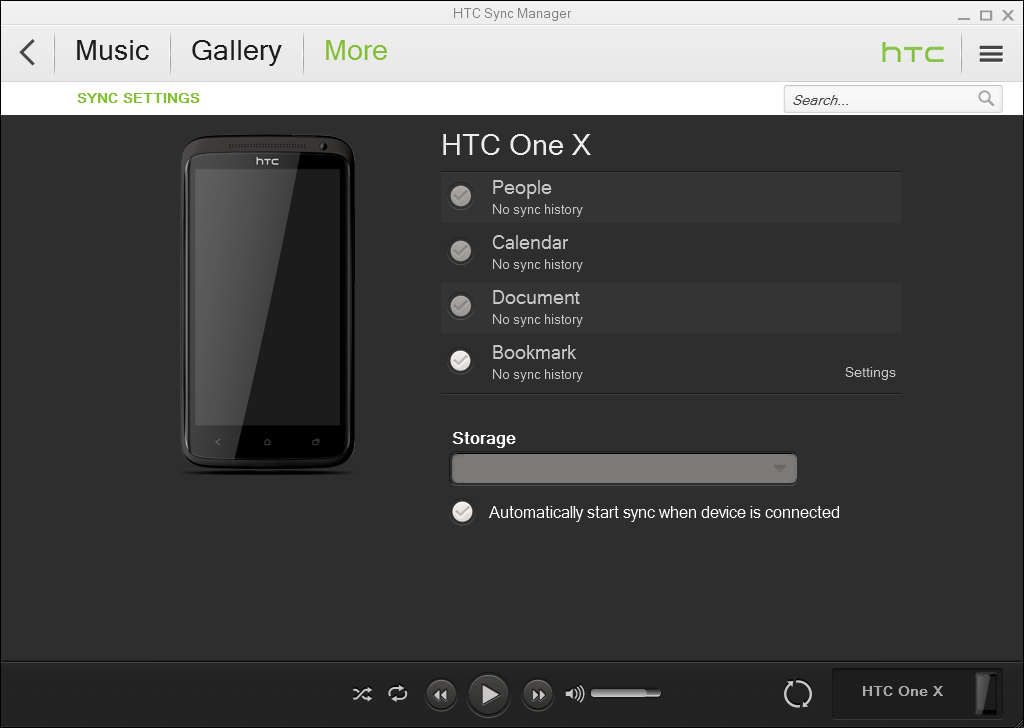 The disable the option "Automatically start sync when device is connected" under the More tab did not work for me. Even after this is unchecked, it still starts the program when I connect my phone. Sometimes I'm just looking for the charge. Yet I have to wait for the program to load on each plug-in, then manually disable. Real pain.

Not the answer you're looking for? Browse other questions tagged htc-desire htc-sync-3.0 .

4
Is there a better sync application for Windows than HTCSync?
3
"My Calendar" and "PC Sync" -- How to Delete?
1
HTC Sync fails to start when phone connected "updating htc library"
0
Where are the 'stock wallpapers' stored on the htc Desire S?
1
Can I set my HTC Desire into sync-mode without using touch screen
1
Unable to Connect My HTC Desire SV to My laptop: Unknown Device
2
What RUU do I need for my HTC phone?
1
HTC Desire cannot connect with HTC Sync
0
How to root htc desire 326g dual?