Can't I change the sound volume with the screen locked?

When I'm listening to my podcasts, with the screen locked and turned off, isn't there a way to enable change the sound volume (with the physical volume buttons)?

That most likely depends on what phone and interface you have. On, say, a Galaxy S3 with the stock TouchWiz UI, when music is playing in the Samsung player or in Google Play Music, the volume control is enabled at the lock screen. On some other devices, it may not be possible. May I suggest editing your post to include which phone model you have?

In CM they have a hack (or implementation) so that you can change the volume over the lockscreen by pressing the volume up/down key. Also pressing it multiple times will seek/change the track. Now I had two cellphones Optimus one from LG (GB) and another mobistel clone (running ICS) and the CM rom worked for both of them. Firstly requesting, include the model of your phone here and if possible check for some GB/ICS rom to have this feature by default.

EDIT: Is this device the same you have? http://get.cm/?device=solana In case you are - cheers ! you are going to be a cyanogener shortly :) Try for a nightly build. I must not say they are super stable but you can get a feel of it, assuming you are running a root device.

VLC supports such a feature. It is the official Android version of the world-famous VLC media player. You can change the volume of what you are listening with it while your phone screen is locked. It is available for free on the Google Play Store. VLC is still in Beta status however it is quite stable and it works well.

It should be noted that VLC is only available for devices with a ARMv7 hardware architecture. And it is the case of the Motorola RAZR D3. ;-)

If you are wearing a headset when listening to your podcasts (which I assume), and those are wired and provide a physical button for play/pause, there might be an additional option using physical controls:

The playstore offers a bunch of headset control apps -- some of them manufacturer specific, others explicitly manufacturer independent (in praxis, both mostly work manufacturer independently -- it just might take you a while to find the one working best with your headset). Those utilize the single button most headsets offer to perform different tasks. For volume control, with most of them long-pressing the button increases volume, while a short press followed by a long one decreases volume (in both cases, until either you let go of the button or the volume reaches the end of its scale, whatever happens first).

I personally tried two of them: first I used JAYS Headset Control, which worked fine for increasing, but failed in 90% for decreasing volume -- which I address to the fact that I don't have a Jays headset. So having a Philips headset, I tried Philips Headset next, and as expected it worked perfectly. 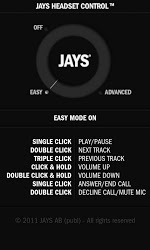 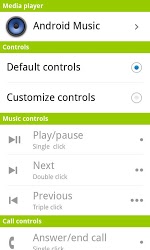 As you can see by these example screenshots, "command sequences" seem to be almost standardized (for combinations up to 3 presses, that is -- the "quadruple click" seems to be an added speciality of HeadsetButton Controller). So if you want/have to switch at a later time, you do not even have to change your customs regarding this :)

Not the answer you're looking for? Browse other questions tagged 4.1-jelly-bean audio volume-control podcast .

1
incoming call ring volume ( sound - silent - vibrate )
3
Bluetooth headset in-call volume doesn't change?
24
How can I change media volume when no media is being played?
0
Sound volume randomly changes
1
Changing the ringing volume when pressing volume keys
0
How to skip music tracks with screen off?
0
Volume buttons unexpectedly started waking the phone from - how to disable?
5
How to turn off the beep sound when pressing volume up/down buttons on Lenovo s660?