What is meant by “nightly” in the context of mods?

I'm using CyanogenMod and all of the updates are always "nightly". What does this mean? I'd prefer a more stable update then the newest with latest features. Is there anyway to get this (I have noticed some stability issues)?

See here for what I'm talking about: https://download.cyanogenmod.org/?type=nightly

By the way, I always update from my phones update feature for CM.

From FAQ on Cyanogenmod Forums :

These builds are highly experimental. They are the bleeding edge and it is possible for things to break. These are automated builds that are used to test whether the code added to the code base compiles properly. If it does compile, that’s a result. If it doesn’t compile, that is also a result.

The CyanogenMod team releases these builds to the public to allow them to see the progress made. Usually these builds work great and many people use them as “daily drivers”. However, due to the raw nature and the fast-paced development environment of CyanogenMod, things can go wrong. The dev team does not accept official bug reports for these because of the ongoing development.

Nightlies are not released as an end product.

Once a build has gone through all the development and testing phases, the CM team will release the stable builds. After a stable is released, the team goes back to developing nightlies. It is an ongoing process and will always allow you to see the progress that is being made.


Where do I find Stable and Nightly builds for my device?

If your device is officially supported then visit here and choose the build based on your needs from the left pane: 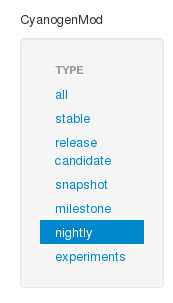 Not the answer you're looking for? Browse other questions tagged cyanogenmod or ask your own question.

1
What's the difference between “cdma_shadow” and “shadow” builds in CyanogenMod 7.2
1
How to find the root of android slow down
0
No system updates for Galaxy Nexus (maguro) with Cyanogenmod 11 after 20140225-SNAPSHOT-Installer
0
Flashing CM 10.2 to 11 TWRP flash not working
0
Verify Cyanogenmod update - checksum?
6
CyanogenMod vs rooting Cyanogen OS
0
Can't reboot system after CyanogenMod 14.1 update