When I connect my phone to my laptop with the original cable, I get the option called transfer files. Now, I have Huawei Matedock 2, 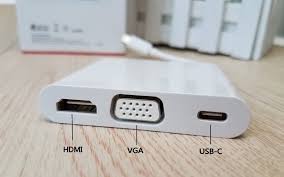 and when I connect the phone to its USB-C port, I don't get the option. It's just charging the phone.

Is it possible to charge and transfer files using this hub on USB-C?

It seems like that USB-C port is kind of unclear on what functionality it supports or doesn't support.

I'm probably wrong on this, but my first thought was that since the USB-C port is right next to the VGA and HDMI outputs, it could be that it's only meant to be used for video output (with a USB-C to HDMI cable or something like that). I'm not even sure that could be the case technically speaking though, as USB-C should transfer data indiscriminately, I don't think it can be "video-only" like HDMI or displayport are.

It's more likely that the dock is just built cheaply, and doesn't support the proper data bandwidth necessary for data transfer on your phone (or at least, as much as Android would like. Android can be really picky with what data connections it accepts over USB, as I've seemed to notice). Also could be that your phone or USB cable has problems with data transmission over USB 3.0, which is sometimes the case with regular USB-A 3.0 ports/cables - I know I've had trouble connecting some of my android phones to USB 3.0 ports on my computers before, and they worked fine as soon as I switched them to a different 2.0 port instead.

I would suggest you try using the USB-A port on the back of the dock instead. Get a USB-A to USB-C cable and use that to hook your phone up to the dock, and then the dock to the computer's usb-c. The problem might just be with some kind of weird miscommunication along the signal path between the computer's USB-C port, and the dock's USB-C port.

EDIT: Also, try a few different USB cables. You may just need a higher-quality USB cable in order to get full data transfer capability. A lot of the time Android will refuse to connect with data transfer if it doesn't like the particular USB cable you're using. It is weird that the one you have won't work through the Matedock if it would otherwise work plugged directly into the computer, but it can't hurt to swap it out anyway and see if a different one fixes your problem.

Not the answer you're looking for? Browse other questions tagged usb file-transfer or ask your own question.

1
Powered USB hub not charging phone. Kernel options?
2
Android device with USB HUB and Charge
2
Charge and USB keyboard through 1 USB port
1
Alternative way to transfer many files between two Android phones with many restrictions
6
How to get USB file transfer working on Oreo 8.1?
5
File transfer over USB cable option no longer appears after upgrade to MIUI 10
1
Trouble connecting phone over usb-c