I have a Nexus 7 16GB which behaved wonderfully for a few months. I used an NFC app once and the tablet began boot-looping, and lagging. I turned off NFC when I could and reset the tablet. It was fine for a day or two but then started locking up again. I've changed the bootloaders to try to recover it, to no avail. After attempting to upgrade the OS and it totally locked up, I finally RMAed the tablet (PAIN IN THE BUTT!!!, Thanks Asus...) I finally got my tablet back and the same issues have started again. I do have NFC turned on, but haven't installed the app that caused the issue last time (NFC tag writing apps)

I downloaded CPU Spy and have tracked the CPU states to find that my CPU isn't throttling up very much, and it hardly reaches Deep Sleep either. Instead, it spends 7+ hours (not touched by me) at 475 MHz. It doesn't respond to the unlock very quickly, and it often gets stuck in a screen orientation.

The RMA apparently didn't do anything, although they didn't charge me for anything, so they must have found something. Is there anything I can do to see if somehow software I've installed is causing this? Any suggestions? I'm really frustrated. I've attached the CPU spy screenshot, and have a logcat file as well. Is there anything more I can do to track this down? 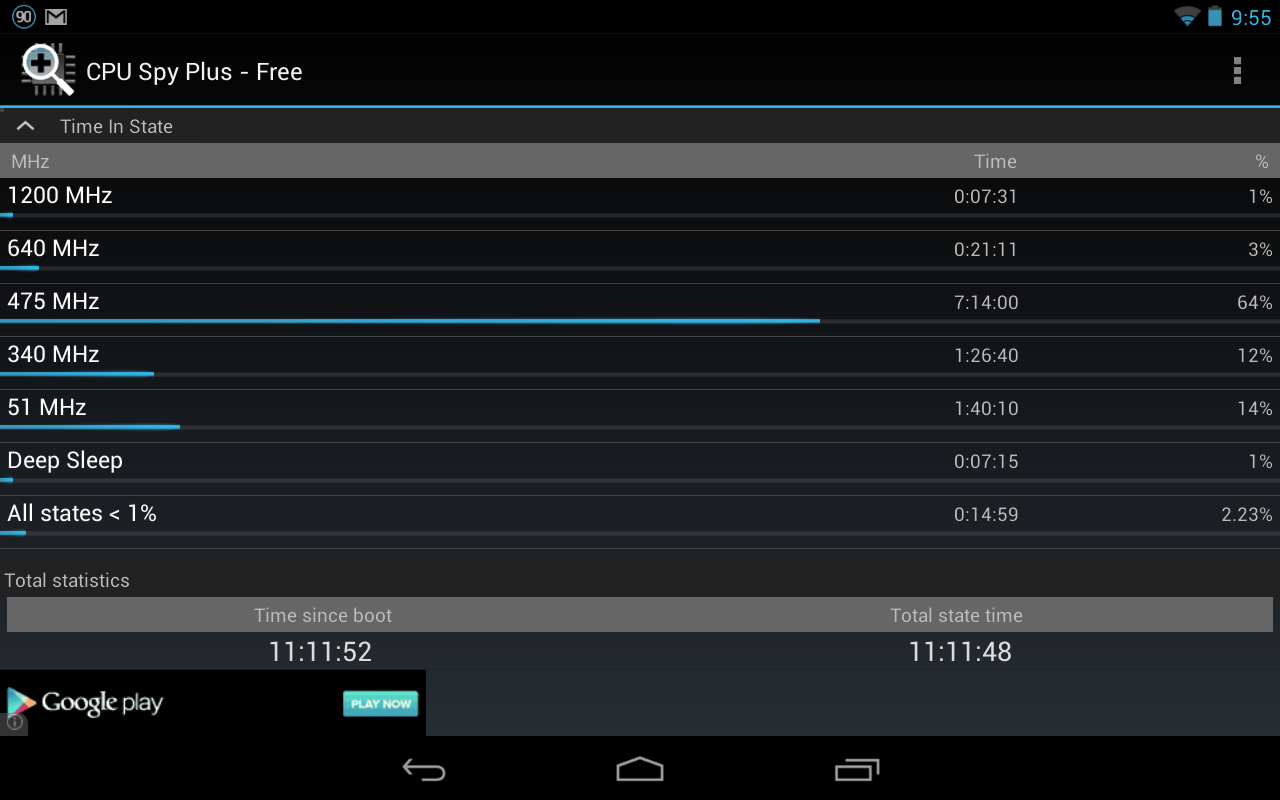 EDIT: Further information: I've gotten it to consistently boot now, but it still falls into a 'always on' with "Android OS" being a major draw on the battery. It will say something like "keep awake for 7+ hours". I'm attempting to chase down an app which has the 'stay awake' permission and see if it is something like that.

EDIT: updating to Android 4.2 increases the stability, and the battery usage is more specific. The NFC service is keeping my tablet awake all the time. Battery use screenshot

Please erase all data and the dalvik-cache (if you have recovery).

Are you using the stock or custom ROM?

This looks to me like a bug in the ROM to do with NFC - this is the only reason the device would lock up like that.

If you are using a custom ROM, I suggest you contact the ROM developer with the logs, if not, check for a software update.

The NFC service will only run if NFC is enabled - if you disable it, and then reboot, it should no longer be active. If it is you can kill it via Settings->Apps->Running.

Not the answer you're looking for? Browse other questions tagged nexus-7 boot-loop or ask your own question.