“Google can't reach the feed at the moment.” error stacking up and not clearing in Google Now

They are piling up "Google can't reach the feed at the moment." error messages in the Google Now screen.

I did nothing to make these messages appear, I think they appear when the app is syncing in background.

I have experienced it under good and stable 4G.

These errors do not go away even when I pull-to-refresh, I must "force stop" the Google app to clear them manually. I've tried clearing Google App cache and data but this problem still happens.

I've been facing that issue for a couple of months. 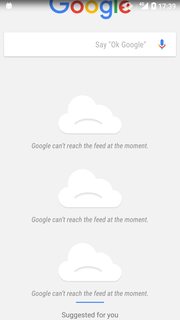 Browse other questions tagged 6.0-marshmallow google-now or ask your own question.

4
How do I erase my work location from Google Now?
7
“Can't reach Google at the moment” when using Google Now
1
Google Now - “no app found to open url”
3
“Check Your Connection And Try Again” repeated prompts
1
New Phone - Google location not syncing/sharing to desktop
2
Google Now cards not loading
1
Internet doesn't work when screen loses focus
0
How to stop update notifications for disabled apps on a Family-Link managed device?