What version of Cyanogenmod did the `Developer Option->Root access` become available? 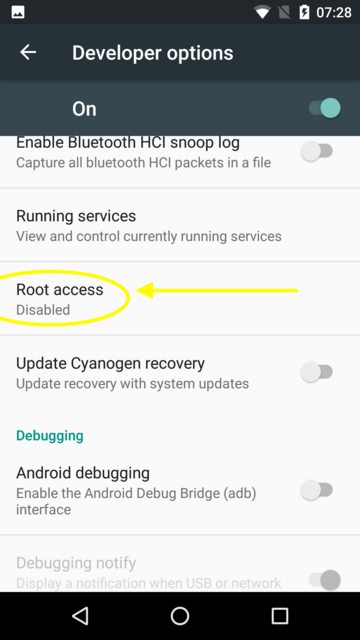 However I'm tinkering with this older device which may have predated that feature.

A related question that could help find the answer is to figure out what would be the appropriate repo in the cyanogen github (https://github.com/CyanogenMod ) to search for the UI that renders this set of options to check when it was first introduced? Basically which repo does the Android GUI go by?

Found a direct UI hit at least with some resource strings in the last/mainline branch that checks out from the repo by default which is cm-14.1. It started by finding a repository that happened to have the words settings and app in its name was a very strong clue to start with. In the screenshot above you can see that the UI reads Root access and that is what we find verbatim in this resource file.

Going back to the branch that is installed on the device, or at least the closest stable matching variant, I do in fact find that root access resource string being present. I'm hoping there's something interfering that I can twiddle to bring that option to the forefront again because it's not showing up.

Doing a blame on that version leads to this commit...

Snooping around further in that diff, it looks like I may be out of luck, or apparently at the time it was decided that user builds do not get this feature, but engineering builds do.

The logic is all predicated on the build of the OS

Might be completely out of luck here because that is not something that can be changed at runtime as far as I can tell. This is a compile-time/build-time baked in attribute :-(

Not the answer you're looking for? Browse other questions tagged cyanogenmod or ask your own question.

0
Need help re-rooting my Sprint Note 3 running CM12.1 Nightly 5.1.1
7
Unlocking Android phone immediately after reboot
5
Where have all my wifi credentials gone?
0
“Android Pay is unavailable” on Note 2 running CM 12.1
2
Dialer app doesn't show dial button
10
How to get the latest security updates for CyanogenMod?
1
Gapp on Cyanogen 13 not working
3
How can I fix the “incompatible data” issue when flashing Cyanogenmod onto my Xperia Z3 Compact?